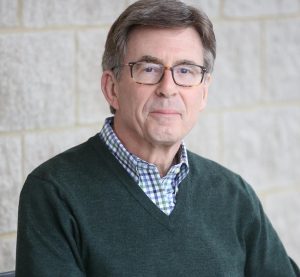 How long have you been a Vincentian? I started after I retired 13 years ago.

How did you become a Vincentian? I was volunteering in the food pantry on Bank Street one Saturday morning, and one of the Vincentians from Christ the King suggested I come to one of their meetings. I went to the meeting, liked it, and immediately changed parishes and joined the Christ the King Conference. I’ve been there ever since.

How did you get to know St. Vincent de Paul? A few months earlier, we had sent in a modest contribution and received back a nice note from Liz Carter, our prior Executive Director. That prompted me to ask one of our officers at Fifth Third to set up a meeting with Liz so I could meet her. Following that meeting, Liz invited me to come down to Bank St. to discuss volunteer opportunities. It’s kind of humorous; I remember the first meeting with her, I latched on to the idea of working in the pantry right away. When she mentioned home visits, I remember thinking to myself, there’s no way I could do that, but of course I’ve been making home visits ever since as a Vincentian!

What do you enjoy doing the most?  I enjoy being with other Vincentians and helping our neighbors that come to the pantry to shop. Being able to connect with the people is what makes it so rewarding for me.

Is there anything else you want to add?  The one thing I would say is had I known that being a Vincentian was as rewarding as it is, I probably would have retired a lot sooner.

How long have you been a Vincentian? Ten years

Your role in the Society: President, but I also share the treasurer’s job and act as Spiritual Advisor.

How did you become a Vincentian? In 2009, I was just completing graduate school at the Athenaeum of Ohio. Our parish pastor came to me and asked if I could help with the St. Vincent De Paul Conference. The treasurer at the time was in his mid-80s and had medical issues. I told him I would give it a try. He then gave me a cardboard box that had a checkbook, several boxes of checks, a large wad of bank statements, and a pencil ledger that was both the record of payments and the only record of client contacts. Hmmm. My initial job was call handler and treasurer, handling all incoming calls and client contacts, along with reconciling the checking account. I was doing this in the midst of Deacon Formation. Several years ago, I assumed the President’s role because the man who had held that position for many years was in his mid-80s and could no longer participate.

Most memorable home visit: It is always heartbreaking to visit homes where a single mom is trying to care for a child with severe handicaps while assisting her other children. These people are always grateful for any small assistance we can give.

Biggest lesson you’ve learned as a Vincentian? The poor have many faces. Sometimes they are dirty faces. Sometimes they are faces that have self-inflicted wounds. Sometimes they just need a shoulder to lean on. We never did learn from the Gospel story how many times the rich man walked past Lazarus. When the rich man died and went to his eternal place of punishment, we find out that he knew Lazarus by name, and he knew that he had passed him by. Perhaps that was his greatest failure: Knowing that the man needed help and doing nothing about it. Lazarus is always at the gate.

What has made you stick with the ministry? It is satisfying work to be able to help people who are suffering through tough times. It has helped learn compassion for the poor which also has helped me in my ministry as a deacon. It also has been challenging work because of the time it takes to do everything.